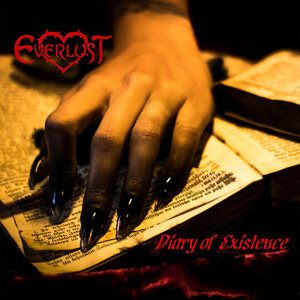 Evelust have released their second full length album “Diary of Existence” on May 7, 2021.
The album consists of 11 compositions, which are like different diary entries. "Diary of Existence" describes the feelings of a person writing a diary.

The mood is mostly melancholic in songs like Land of Dreams, I Never Was and Alone, which are heartbreak ballads about loneliness and unrequited love, even a little mystical Despair with more apathic feels. There is also energy driven philosophical song Running about being alone in a crowd and running from oneself, lustful Everlust and bipolar Destroyer. The band also made their version of famous Sam Smith song Writings on the Wall. “Diary of Existence” also features a duet song Entwined with Finnish band Lamori frontman Matias Juselius, which is also a romantic ballad about sick relationships.

“Each of these songs are like the tales about our feelings going through some difficult situations in life and getting over them. We hope that these songs will be a helping hand to our listeners facing the same problems.”

Everlust is a gothic rock / melodic metal band from Riga, Latvia. They music can be described as melancholic and romantic. They sing about love, passion, heartbreak, misery, death. Besides, they are the only active gothic band left in Baltics at the moment with strong influence from bands like Draconian, Theatre of Tragedy, Charon, Paradise Lost, Sentenced, Lacuna Coil, Trees Of Eternity and more.

Idea of founding a band came to Vlad in 2006 and the name Everlust was chosen as the most precise reflection of his musical taste and influences, like love, lust, passion, relationships, failure, loneliness, misery, life, death, hope… After several unsuccessful tries to form a band, he finally records and releases himself "Unreal" demo in late 2007 (7 original compositions + cover of Depeche Mode – In Your Room). Then followed inactive period and another try in 2013 which was successful. The band was formed and started to rehearse. After several changes in line up, Everlust makes first public appearance at Studentu folkfestivals in 2014.

Then there were various local concerts in Latvia. The band performed acoustic concerts in various bars and took part in some festivals. The band has won “Best band” award in 2015 at “A music factory – Nice place” hosted venue, “Rock’n’roll award” at “Osvalds 2015” festival. In 2016 Everlust starts recording their first album and continues public performances around Latvia. 2017 states their first visit abroad to gig in Lithuania and release of their first full-length album “Hurts to Live” (9 original compositions + cover of Roxette – I’m Sorry and a Bonus track – acoustic cover of Nick Cave & Kylie Minogue – Where The Wild Roses Grow). 2018 follows with work on new material and making first music videos of Undead and a new song titled “Woman in White”. It also brings some difficulties, as Natalia decides to leave Everlust after 4 years.

Then new frontlady Kate Brown joins the band and the new era is coming up.
At the very end of the year 2018 Everlust sign the contract with managing agency “THP Production”.

2019 begins with another line-up change as Slava decides to leave the band to concentrate more on his designing projects. Pavel fills the vacant slot and Everlust is ready for another concert season as well as working on more new songs, music video and the next album.

2020 Starts with Everlust signing the record deal with Wormholedeath records label from Italy and announces the new album “Diary of Existence” to be released in 2021. Also Andrew joins Everlust as keyboard player. Everlust performs at one of the biggest festivals in Latvia – “Zobens un Lemess” Open air. In November the band travels to Italy and records all the tracks for new album at Titans Lab recording studio.

2021 Everlust starts with album promotion activities, releasing single “Land of Dreams” and touring dairy. On May 7 they release the second full-length album “Diary of Existence”. During the pandemic Everlust gives three concerts in the summer including BloodyNews online festival. The band also records the cover of 90’s pop song “Happy Nation” by Ace of Base which is inluded in Antichrist Magazine “Eurodance the Metal way” compilation. After a year in the band Andrew leaves due to lack of time.